Heavy rain battered Wirral overnight which has flooded parts of the area. Reaction and information from around Merseyside on todays flooding here (refresh page for updates):

Here’s the video we took on Wednesday of parts of Wirral underwater:

We are out and about to film some video of the floods.

SERVICE UPDATE at 1515: One lane of the M53 has been closed between #Moreton and Woodchurch This will impact on our #Wirral services.

Around a hundred houses have been flooded as a river’s burst its banks because of the heavy rain in Moreton on the Wirral.

Environment Agency: ‘We will continue to monitor and will update this message as the situation develops.

‘We are out clearing debris screens to minimise potential blockages and flow restriction.

‘Rain is now easing and is expected to clear the area later this afternoon’.

2:45pm: Latest picture from Brimstage – Sent in by Ethan Fahy on our Facebook page:

One lane is closed and there is queuing traffic on the M53 northbound between Junction 3 A552 Woodchurch and Junction 2 Moreton Spur, because of flooding.

#TeamEA are clearing debris screens in #Wirral & working with @WirralCouncil to keep rivers flowing and minimise the impact of flooding.

A council spokeswoman says it is believed some homes may have been evacuated near the brook and the council was workign to establish if that is the case.

Latest update from Avon buses (Wirral) – all buses are now out on the road, normal timetable resumed, with possible minor disruptions

1:20pm: Kirsty Bakstad sent us these pictures to our Facebook page of the fast flowing River at Raby Mere: 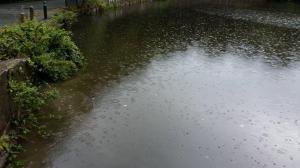 1:15pm – It’s yesterday’s rain and last nights rain that has contributed to all this flooding:

‘On the way back from heswall I was diverted 3 times! The roundabout at the irby mill pub is closed in 3 directions’!

Brimstage Road in Bebington remains closed due to flooding.

Neston Road in Heswall closed due to flooding near Parkgate Lane.

Bromborough Road in Bebington remains closed in both directions due to flooding.

“The road to club has been re-opened by the police. Members now have access to the club. What a great day for a swim!”

Bit of flooding on the Wirral (Brimstage Lane) ☔️ 🚣🏿 pic.twitter.com/etVBkLOM5x

487 only operating as far as Thornton Hough due to Neston Road being closed. Also delays and diversion to services 84 and 85.

SERVICE UPDATE at 1135: We are experiencing disruption to #Neston#Liverpool service 487 due to flooding on Hinderton Rd and Thornton Hough

“Due to flash flooding at the entrance, the Prenton club is totally inaccessible this morning.

All surrounding roads including the motorway are gridlocked.

“We are working with the council and United Utilities to get this rectified as soon as possible.

This means that unfortunately there is no access to the club at this time”.

11:35am – Pictures from Thornton Green, Wirral:

1:20am – Sunny in Liverpool but still wet here on Wirral:

11:10am – EXCLUSIVE PICTURES: One of our photographers Sean Reed has sent us these pictures of the flooding around the Birkett in Moreton. Fire brigade on scene. 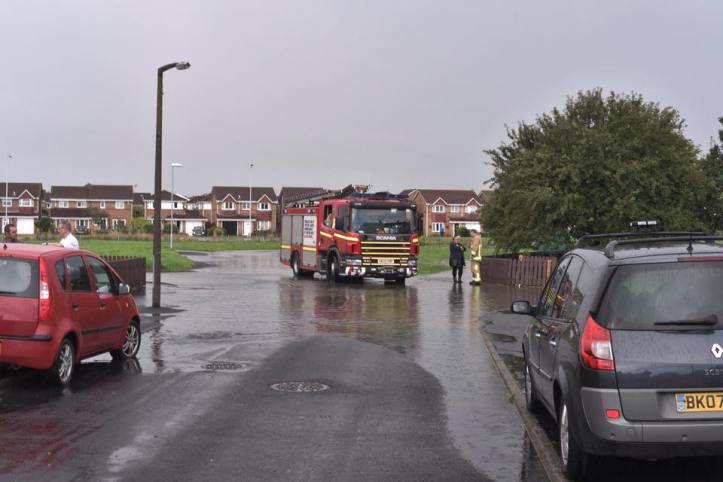 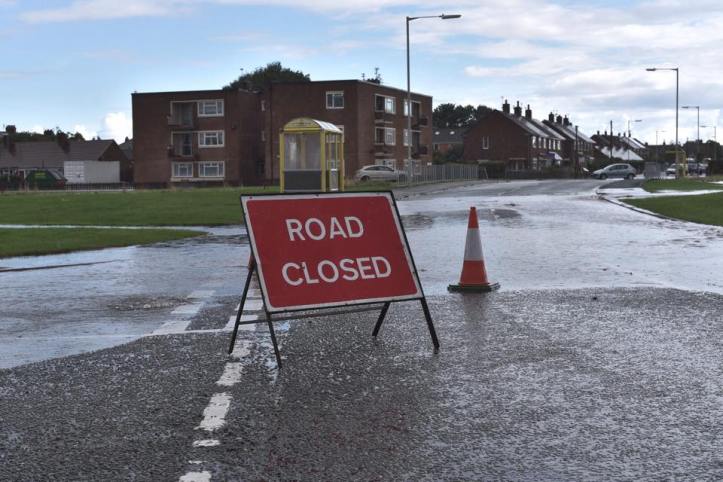 11am – Merseytravel expect services to return to normal:

Avon bus services on the Wirral are starting to return to normal. We expect a full service to be resumed within 2 hours. — Merseytravel (@Merseytravel) September 2, 2015

Millhouse Lane in Moreton closed in both directions due to flooding on Oakham Drive.

The following roads are currently closed as a result of localised flooding overnight:

Wirral Council have said: ‘We are working closely with our Highways Services Contractor, BAM Nuttall and focusing our attentions on high priority routes to ensure the roads are opened at the earliest opportunity.

‘However, this may take longer in some cases due to overspill from adjacent watercourses/fields etc’.

10:20am – Latest radar showing parts of Wirral still being battered by heavy rain.

Stagecoach: “Woodchurch Road is flooded at the moment and we think there has been a RTA we are delayed by 10-15 mins”.

Brimstage Rd, Higher Bebington closed. Some cars got stuck & needed fire brigade to pull them out.

In Birkenhead – reports the A552 partially blocked and queueing traffic due to flooding at M53 J3 (Woodchurch).

On the roundabout Neston Road in Thornton Hough closed due to flooding between Smithy Hill and Church Road / St George’s Way.

9:30am – VIDEO: Drivers being brave by driving through flood water in Bromborough:

Operational difficulties due to flooding are affecting most Avon bus services on the Wirral. Call Traveline on 0151 236 7676 for info

We are investigating an issue in CH41, #Wirral where customers have no water/poor pressure http://t.co/AwSFZOSQ4K — United Utilities (@unitedutilities) September 2, 2015

Rainbow over Birkenhead, although you can hardly see the Wirral today! pic.twitter.com/L5oMqoYr2N