UK’s Tornado Alley revealed: Do you live in a tornado hotspot ?

New research by scientists from Manchester University has revealed the UK’s tornado hotspots.

The UK is the capital of the world for the amount of Tornados per land mass, as we have around 34 per year over quite a small area of land compared to other countries.

Manchester Uni scientists plotted reported tornados over a 32-year period to a map of UK for the first time in 20 years.

MORE: Philae lander contacts earth from comets surface after 7 months of no power.

The map revealed that 95% of the storms were categorised as F0 or F1 tornadoes, meaning windspeeds of up to 112mph.

The rest were categorised as F2 tornados, when wind speeds reach 157mph.

The area most likely to be struck by a tornado was revealed as west and south west of London, which had a 6% chance per year of a tornado occurring within 6 miles of its location, which is a once in a 17-year event.

The map also shows that Liverpool has a 2% chance and Wirral a very small 1% chance of a tornado occurring within 6 miles of the area. 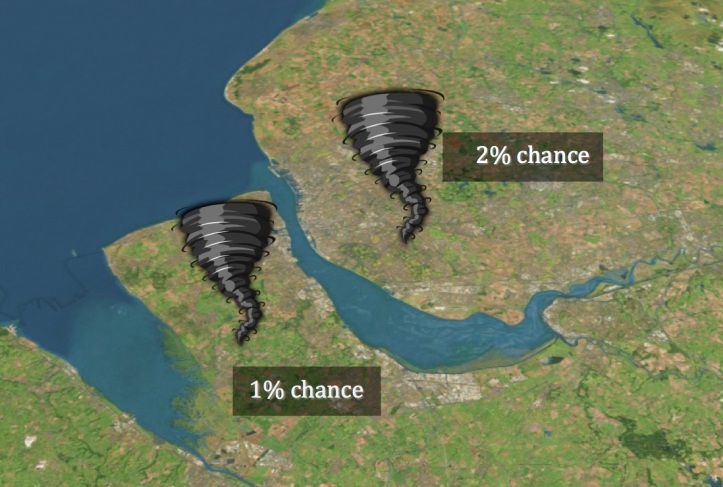 Lead author of the paper Kelsey Mulder, of the School of Earth, Atmospheric and Environmental Sciences at The University of Manchester, said: “F2 tornadoes are still quite strong and are perfectly capable of causing damage and injury.

“For example there was the twister that hit Birmingham in 2005 that caused 19 injuries and £40m of damage.

“Because tornadoes are capable of causing such damage it is important that we have some kind of idea where they are most likely to hit.”

The peak season for tornadoes is from May to October, however, they can occur at any time of the year.

WATCH our top 10 most shocking UK Tornado moments below, which includes when a Tornado did strike Wirral:

This site uses Akismet to reduce spam. Learn how your comment data is processed.